Maybe some of you are still wondering what does nyeongan or ppoong mean? Why do Blackpink members love to say Ppoong? Here are Blackpink vocabularies you must know. So you won’t get confused when you find some on social media. They are unique, cute and funny. 😌

On Wednesday night, February 28, 2018, through Vlive CH+ Blackpink Jisoo corrected that it’s not nyeongan but nyongan: 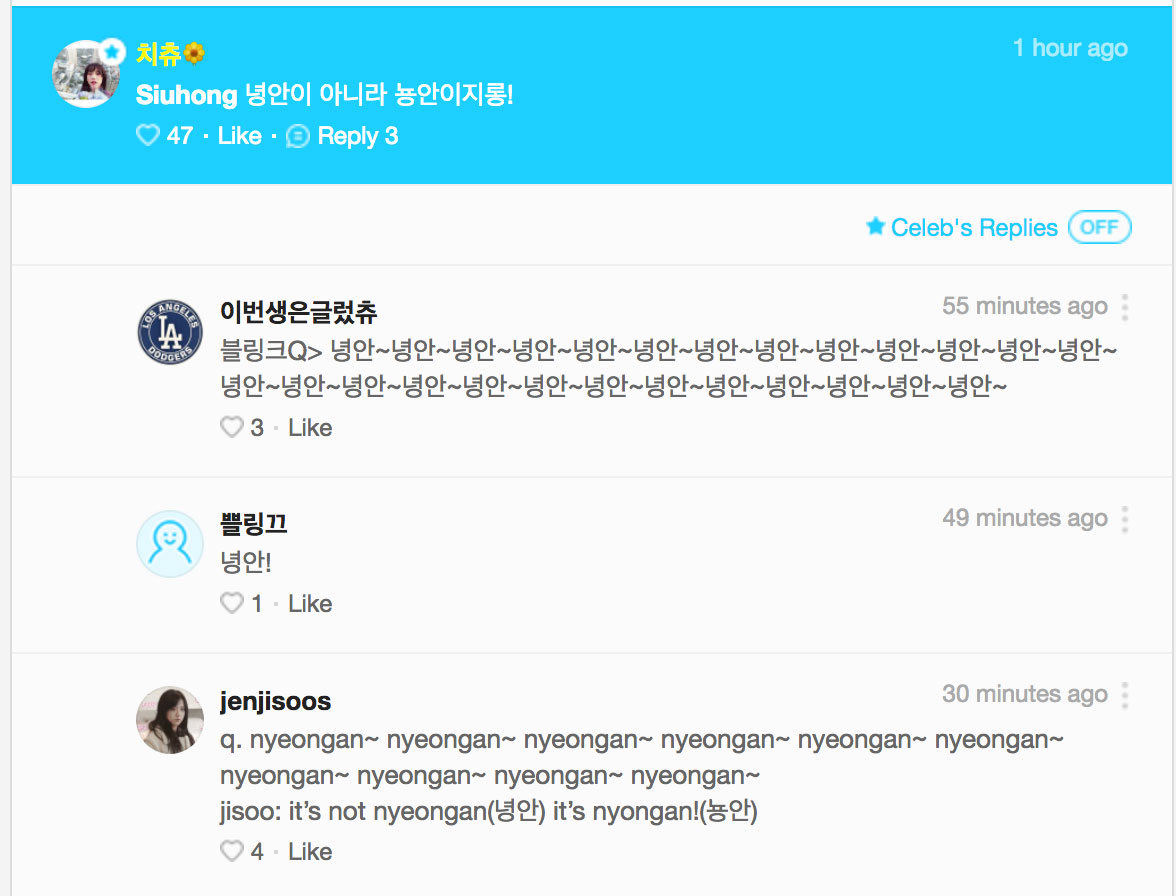 Ppoong is a catchphrase made by Blackpink Jisoo. You can say it whenever you want. It doesnt have specific meaning, even Blackpink Jennie said it doesnt exist.  In Hangul it is written this way, 뿡, therefore sometimes it is said as bboong. Just choose which one you love, either Ppoong or Bboong.

Chunday is Jichuu on Sunday, or we usually call it as Chuu day. She becomes an MC every Sunday on SBS Inkigayo TV Show. Blinks always wait for this day, Sunday, to see Jichuu performs on the show and her lively car photos leaving Inkigayo.

Jaesu is a nickname for Blackpink Jisoo given by Doni on Weekly Idol ep. 310.

Jichuu is a nickname for Blackpink Jisoo.

Jinjido is a nickname for MC Jinyoung, Jisoo and Doyoung on SBS Inkigayo

Chi or Chichi is a nickname for Blackpink Jisoo made by herself when she wanted to change her username on vlive CH+.

Jendeukie is a nickname for Blackpink Jennie made by Blackpink Jisoo. Jisoo gives this nickname because of Jennie’s clingy habit when they were still in sharing room. Blackpink Jisoo said on Weekly Idol ep. 277, “In the morning when she cant wake up. I go over to wake her up since we were using the same room. But she kept being really clingy to me. So that’s why I call her Jendeukie.”

Jendeuk Ramsay is a nickname for Blackpink Jennie given by Blackpink Jisoo when they cooked macarons on Blackpink House episode 1.

Nini is a nickname for Blackpink Jennie.

Kai is also Blackpink Jennie’s dog, the white one.

Rose Pasta is a nickname for Blackpink Rose made by Blackpink Jisoo. On Weekly Idol ep. 277, Rose explained, “After my name was decided to be Rose, she (Jisoo) kept on coming to my front door, saying, Pasta… Pasta….”

Chaeng is a nickname for Chaeyoung or Blackpink Rose.

Rosie is a nickname for Chaeyoung or Blackpink Rose.

Chaeyoung is the real name of Blackpink Rose. Her full name is Park Chaeyoung, Rose is her stage name coming from Roseanne Park (her English name).

Chaengmunk is a nickname for Chaeng or Chaeyoung or Rose. Blinks use this word to express Blackpink Rose’s cheek cuteness that looks like Chipmunk, especially when she is chewing food.

Nallalisa is a nickname for Blackpink Lisa along with Jolisa (when Lisa cooks), and Kokki Lisa, made by Blackpink Jisoo.

Nallalisamang (날라리사망) is a contact name for Blackpink Lisa used by Blackpink Jisoo on her phone. 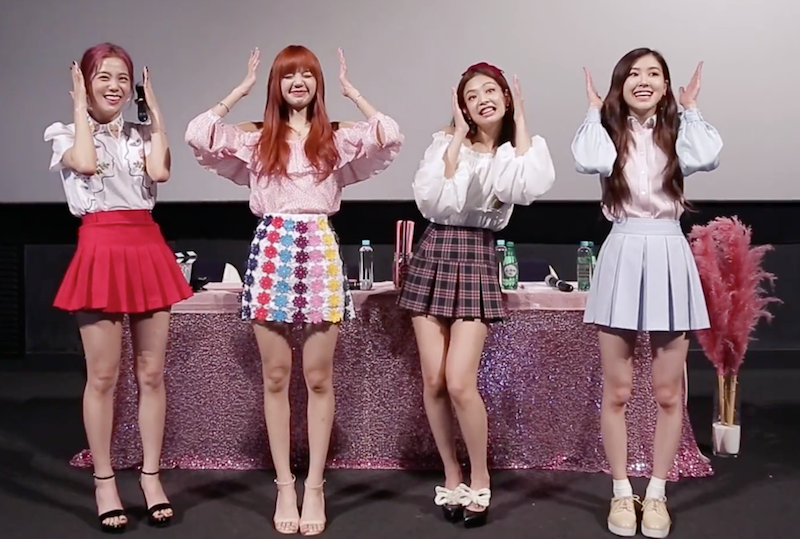 Limario is a nickname for Blackpink Lisa. It comes from Blackpink appearance on Weekly Idol episode 310. The nickname was given by Doni (Jeong Hyeong-don) while calling the members.

Lalisa is Blackpink Lisa real name. Her Full name is Lalisa Manoban. Sometimes Blinks tease her with Lalisa Manobal due to her written name on her passport (revealed by Blackpink Jisoo on their eating pudding Vlive).

Blink is Blackpink’s official fandom or fanclub name. It was officially announced on January 15, 2017 (Korean Standard Time) through Blackpink Official Instagram without any caption (in international standard time, it was posted on January 14, 2017) then it is officially used by Blackpink Jennie on January 16, 2017.Blink is us 🤗

JenChuLiChaeng stands for Jennie, Jichuu (Jisoo), Lisa and Chaeng (Rose). It is a nickname for Blackpink OT4.

LiChaengChuu stands for Lisa, Chaeng (Rose) and Jichuu (Jisoo). Blinks call this way since they often do vlive together.

Jensoo stands for Jennie and Jisoo, it is a nickname for Jennie and Jisoo shippers. This pair is well known for mature, sweet and adult relationship. Many blinks agree that Jensoo is the superior couple. On Knowing Bros ep. 87, BLACKPINK’s Jennie and Jisoo revealed the unique way they became best friends. Jennie and Jisoo once went to a Korean public bath together. They’d only known each other for 3 days at the time, but entered the baths together completely naked. While naked, they talked about their dreams and aspirations together in the steaming room and formed a unique bond. They become roommate and close to each other since then. When Jennie is with Jisoo, her gummy smiles shine bright on her face.

Jenlisa stands for Jennie and Lisa, it is a nickname for Jennie and Lisa shippers. This is well known for romantic and sexy couple. Jennie made this couple official when she posted Jenlisa photo on instagram and call Lisa as her new boyfriend. When this happened, all other ships sink to the bottom of the sea.

Lisoo stands for Lisa and Jisoo, it is a nickname for Lisa and Jisoo shippers. Sometimes it is called Lichuu or Lichoo. Lisa (the real maknae) and Jisoo (fake maknae) are well known for their happy chemistry since both of them are so extra. When they are together we bet you will get so much laughs. They are not only crazy, funny, messy, noisy, & savage but also cute & sweet couple.

Chaelisa or Lichaeng stands for Chaeng and Lisa, it is a nickname for Chaeng = Rose = Chaeyoung and Lisa shippers. This pair is well known for their matching stuff and love to fight (in playful way), since Lisa loves to tease the innocent Chaeng. Blackpink Jisoo usually becomes the third wheel for this couple and she is the one who stop them when they are fighting. Hahaha So cute!

Chaesoo stands for Chaeng and Jisoo, it is a nickname for Chaeng = Rose = Chaeyoung and Jisoo shippers. This is well known for being like sister couple. This couple always fight when they start talking about trees since Jisoo loves trees so much but Chaeng loves Cherry blossom instead. And Jisoo always convinces her to love trees. They are cute, funny and close to each other too.

Chaennie stands for Chaeng and Jennie, it is a nickname for Chaeng = Rose = Chaeyoung and Jennie shippers. Dont forget to use double N ☝🏼😉. This pair is legend for their uncommon togetherness. Blinks usually tease this couple as ‘dont know to each other’ since we rarely see their closeness even when they walk side by side. But since Thailand moments this ship starts to sail, yeah finally.

PWF stands for Playing With Fire. It is Blackpink’s song released on November 16, 2016.

AIIYL stands for As If It’s Your Last. It is Blackpink’s song released on June 22, 2017. Blinks usually write this way, AIIYL, to make it short.

*If you have any other Blackpink vocabularies (or want to add some explanation) please mention it below in the comment section. Thank you! Ppoong!