Watch BLACKPINK Members Being So Supportive to Jennie SOLO Comeback

Lets watch this moment, they are so excited and funny 😂

Lets throw back to this moment,

BLACKPINK Jennie performed SOLO for the first time on SBS Inkigayo on November 25, 2018 and took 1st win during the show

Thank you so much to Jisoo, Rosé and Lisa who came to support me at dawn. Thank you Yang Hyun Suk, cool Teddy oppa who wrote SOLO, hair makeup stylist team, YG staff, managers and BLINK. It’s my 1st solo thank you for giving it so much love. I’ll keep working hard. Bye.

The members, Jisoo, Rosé and Lisa also came to the show at 5AM KST to support Jennie first SOLO broadcast on SBS Inkigayo.

Jennie showed members tangerine during the broadcast on SBS Inkigayo

Sololo~ Jendeuk unni, you’re going to shine today too~~ I’m really cheering you on, hwaiting! Love your hubby – Rosé (Jennie is her wifey)

Take care (dont get hurt) until the end of your promotions!! – Lisa 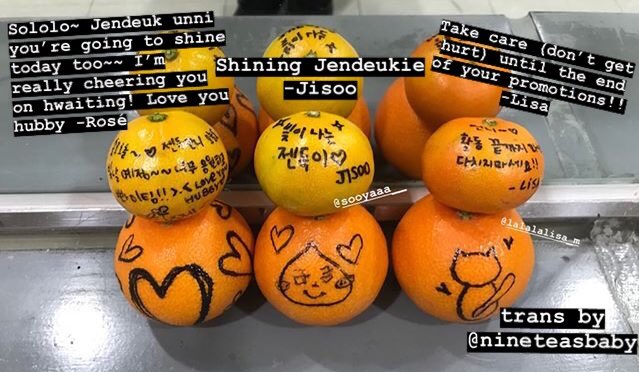 They are so sweet, this is why we love OT4 members. Their bond is so precious and they always support each other!