Blackpink Jisoo did a video live through vlive app after leaving Inkigayo on Sunday, January 14, 2018. The video with 26.22 minutes duration has surpassed 8,005,180 likes in 1 hour. 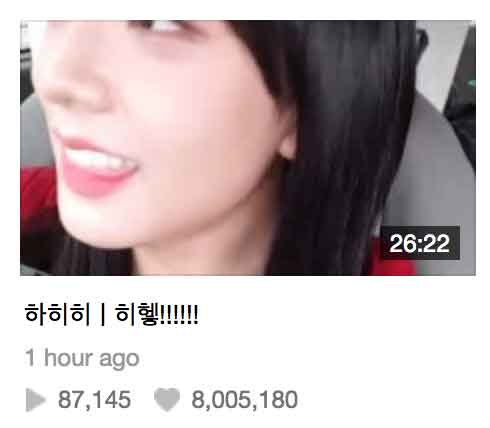 After leaving Inkigayo she did a video live on Vlive CH+ (It’s limited for CH+ user only) when she was heading to camera store to buy new camera. She ended the video when she was almost there.

Unfortunately, the store was closed because it’s Sunday. She then continued doing a video live again but on vlive regular channel.

She talked many things including congratulating Blinks for the first anniversary. Blink is Blackpink’s official fandom or fanclub name. It was officially announced on January 15, 2017 (Korean Standard Time) through Blackpink Official Instagram without any caption (in international standard time, it was posted on January 14, 2017) then it is officially used by Blackpink Jennie on January 16, 2017.

“I’m hungry. I’m hungry? Did you all eat? If you don’t eat, you’ll become hungry. That looks good. If I’m hungry, everything looks yum to me. Tonkatsu? I don’t like tonkatsu. Ramyun? I love ramyun. I like eating it at night. Chicken? Chicken and ramyun together are good.”

“Lisa is so bad at making ramyun. Lisa made jjapaghettit once and the noodle turned out white. I’m sure it’s supposed to be brown but it was white. It was also dry. Anyways, she’s so bad at cooking ramyun.”

She then called Lisa,

Jisoo: Did you know that tomorrow is the day the name BLINK was made?

Jisoo: Say something about it.

Lisa: So much pressure. (Lisa then congratulates Blinks for their first anniversary)

Jisoo: What were you doing?

Lisa: I was talking to my mum, but hung up when you called me.

Jisoo: I’m nearly there, so you better have something chosen when I get home.

Lisa: SO MUCH PRESSURE UNNIE. You’ll want something like curry then.

Jisoo and Lisa were talking about how they’re going to buy a new camera but the camera store was closed as it’s Sunday. Lisa mentioned the brand Nikon or Canon of the camera!

Later on, Jisoo talked other thing,

“When I was in high school, people said my lips looks like a parrot’s mouth” 😂 (*we love that heart shaped lips so much tbh 🙊)

“Ah! When we were doing Secret Santa, the people who didn’t guess their Secret Santa had to those missions during the fan meeting. Also when we were in the blanket store, and we were trying to get a discount, Lisa lost in rocks, paper, scissors so she had to dance.”

Blinks Happy First Anniversary! One Year Down Forever to Go!