We must admit, Blackpink House is getting better and better from one episode to another. Damn! This episode 2 has so much fun and even way more funnier. Love it so much!

Blackpink House is not just showing a video of Blackpink members doing random activities but instead it really shows us what we have been craving for. It not only shows funny video but also shows us how powerful they are, how close they are and how solid they are.

In this episode, Blackpink House tries to showcase Balckpink members’ real beauty, team work, friendship and secret talents that we have never seen before. The concept of this show is so adorable!

We know that Blackpink members OT4 are all naturally pretty and each of them has their individual charm. Therefore, it is good for Blackpink House to highlight their modeling world that explores their real beauty.

The episode 2, explore behind  the scenes of Blackpink Jisoo and Blackpink Rose solo photoshoot.

Everybody knows that Blackpink Jisoo has A score for her natural beauty, even A+. This episode reveals behind the scenes of Blackpink Jisoo when slaying the natural concept photoshoot for Instyle Korea magazine.

Her natural beauty is no joke, even for her 4D personality, we can see it clearly here 😝 Her odds, her randomness, her self-composed song, her extra, her charm, damn we hate her so much (with tons of love) because she has complete package 😭

Her spontaneity shows us that she is really smart, beyond amazing. It makes the show even funnier and has a lot of fun. We admire you singer Kim Jisoo, comedian Chichu, food lover Kimchi, 4D chichu, smart detective Choonan, and the sweet lover Kimchu😍  😎 *She has a lot of nickname btw 😂

Blackpink Rose also got her first solo photoshoot with Ceci Korea. She looks pretty, cute, sweet and mature at the same time. We know how pretty she is during her behind the scenes photoshoot. Blackpink Jisoo and Lisa accompanied her during photoshoot. She looks nervous but then they encourage her by praising her flawless look. 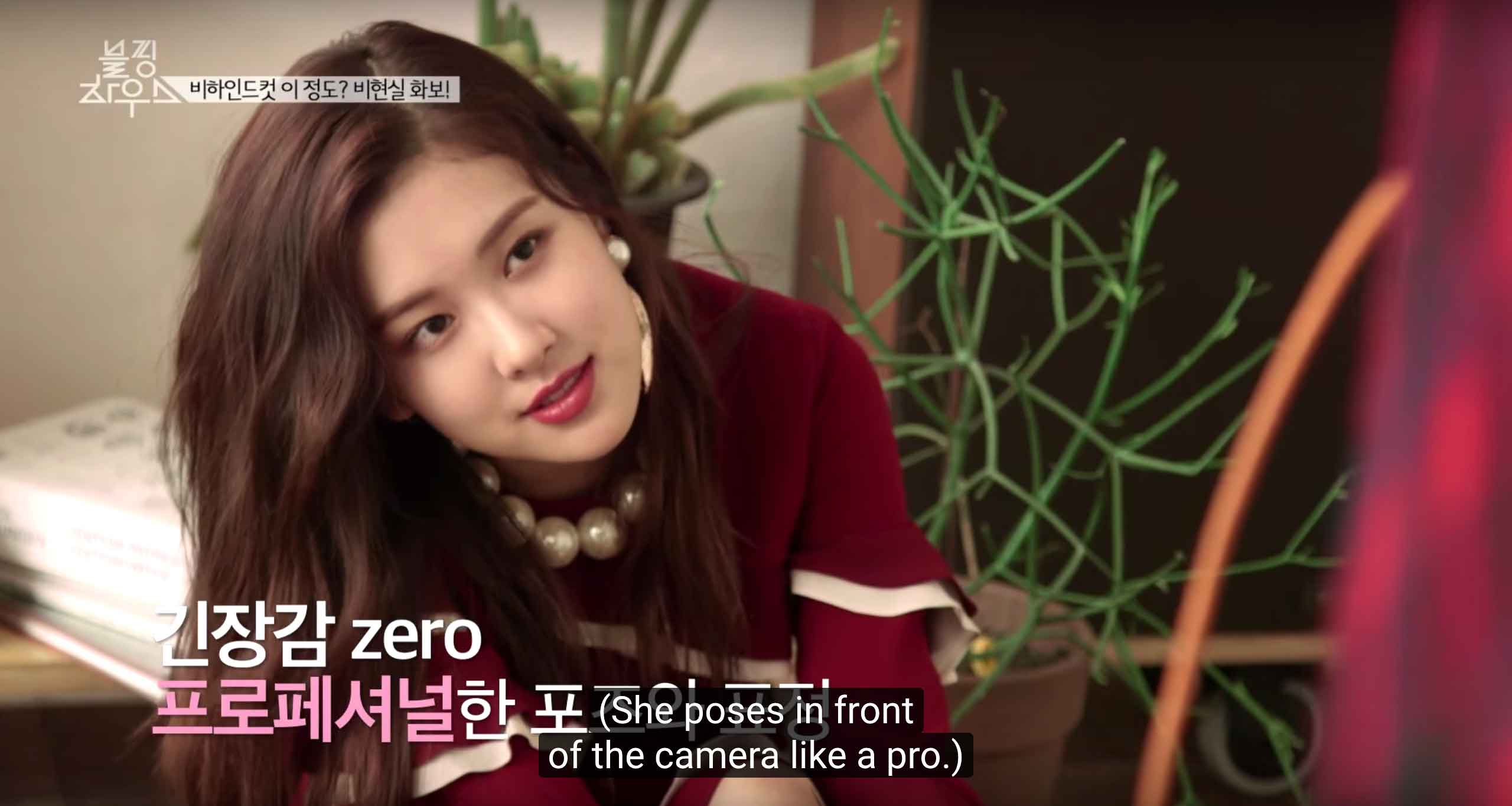 When there are Jisoo and Lisa, its mean that we will see comedic scenes, they went to the wardrobe room and try them one by one like they were in shopping mall. Lisa like so many clothes there, one of them is the fur coat. When she tried it on, it doesnt fit her, too small but then Jisoo tried it and fit her well. This scene is so funny, especially when Jisoo was doing random dance.

Blackpink Rose then came in and Lisa was shocked of her height. Of course, Rose is the tallest member and she is even taller since she wore a high heel. This scene is also funny when Lisa and Jisoo tried to take picture of her but Jisoo is too small than Lisa volunteer her self as ladder, she piggybacked Jisoo so that she can take picture in higher position. Ah they are so sweet 😍

What is good from this episode is they invite a chef to teach them how to make sandwiches. They have made their self made macarons before but for sandwiches they need guidance since they have never made that kind of sandwiches before. 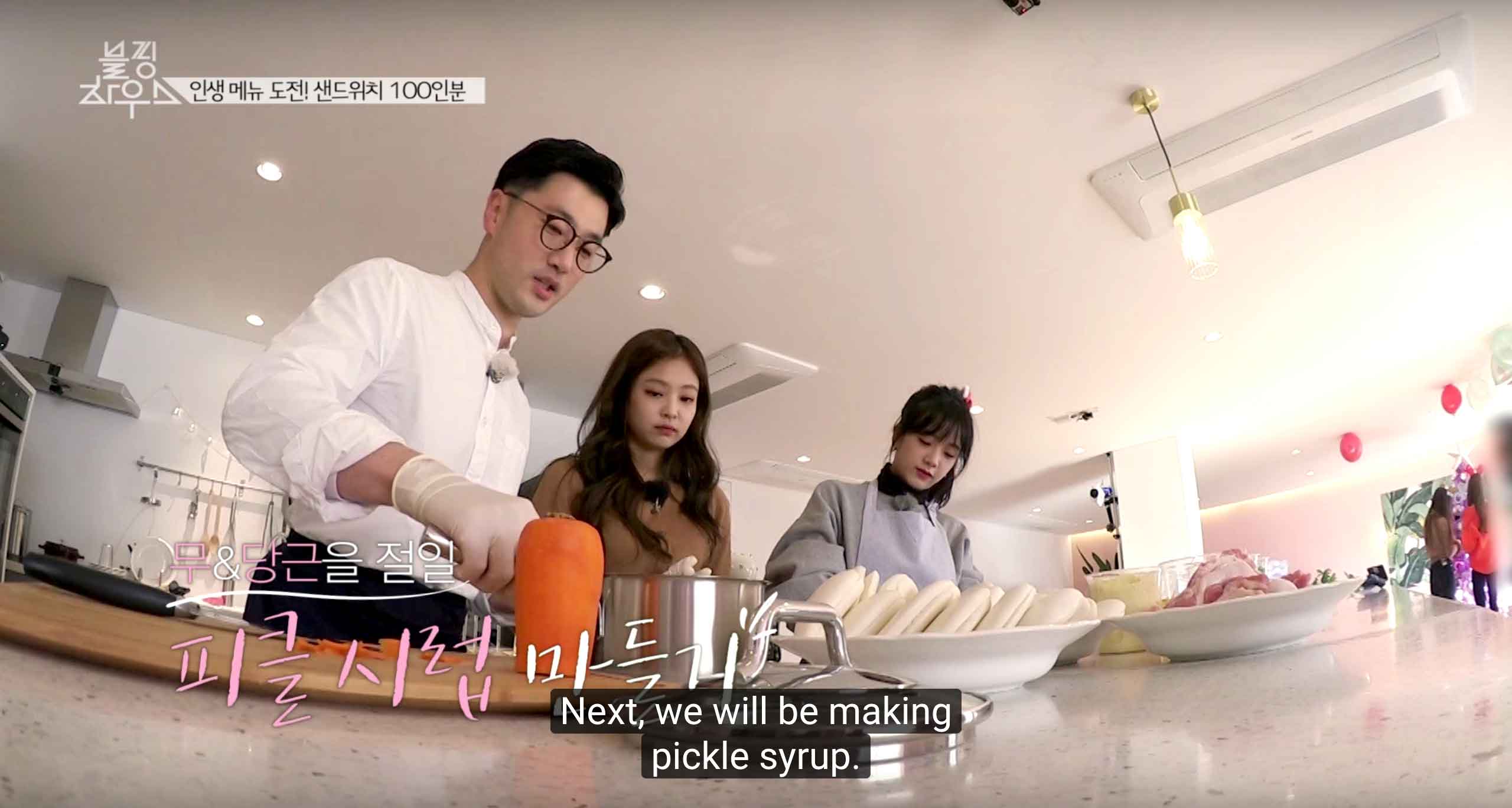 Blackpink Jisoo and Jennie fit so well for cooking thing. They really good at it, and finally they made 100 sandwiches for 100 lucky Blinks during Guerrilla Fan Meeting.

Blackpink Rose and Lisa are chosen to decorate the house. They also invite florists to help them decorating the house with flowers. Rose who loves doing creative things fit this project really well.

While finishing their Christmas tree decoration, there is a funny scene that they suddenly disappear 😂 They found some cats and playing with them outside the house. Lisa really loves cats no wonder she is really into them.

Another thing we adore about Blackpink is their friendship and closeness is no joke. We saw many cute things here in this video, ah they are so lovely and care to each other.

5). Blackpink Rose made toasted bread for the members

There is a scene in the morning when Blackpink Rose felt really hungry, she run to the kitchen and she was happily shocked found out all of her favorite foods are there. She then toasted some breads, but it turned out she made burnt bread. She really enjoyed it anyway 😂 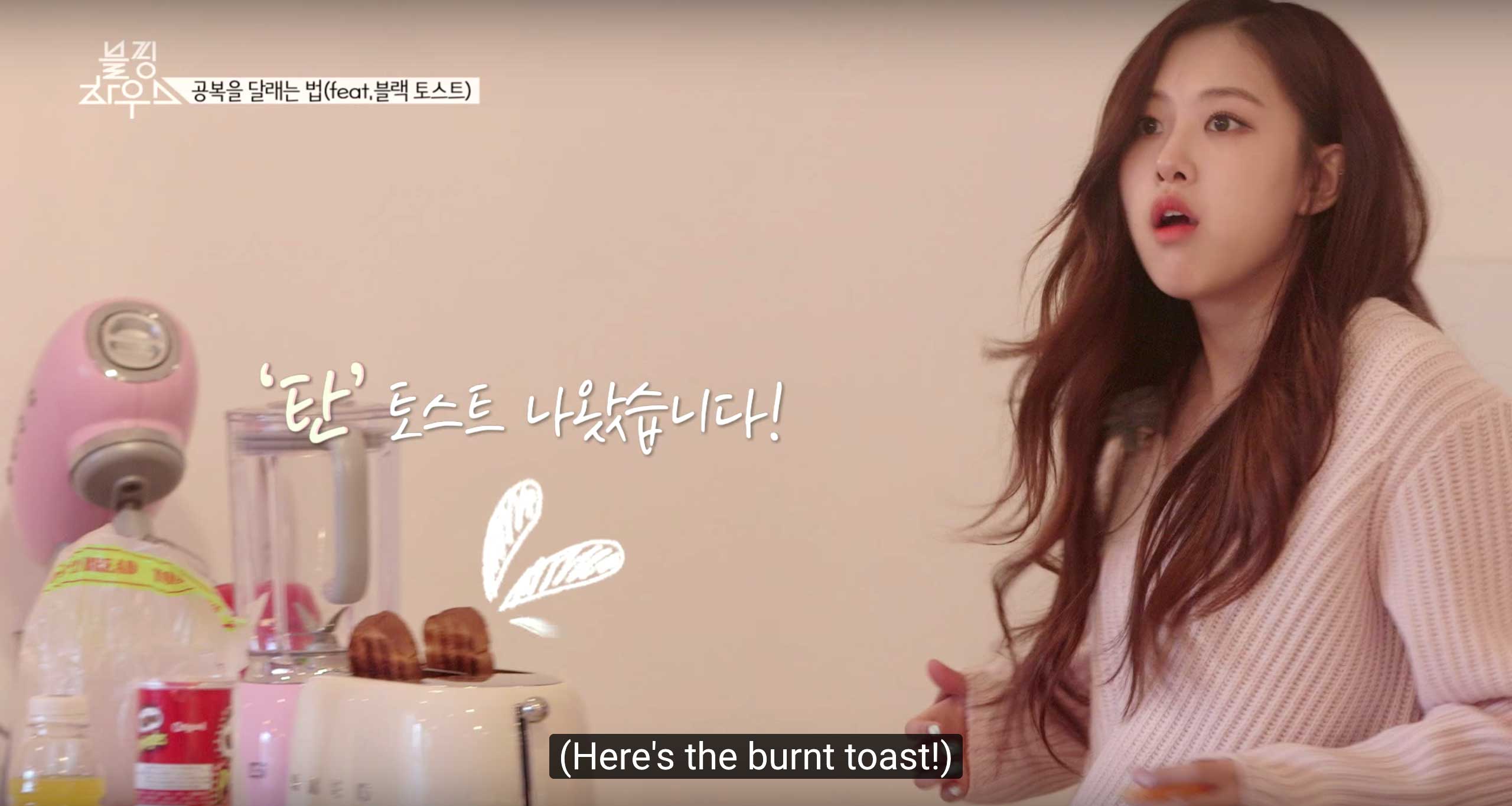 After she ate many breads (she likely looked so hungry 🙊), she made some more and run upstairs, she came into Jennie’s room and gave her one, ahhh Rose is so sweet 😍 There is one bread left 🤔 we thought she will give it to Jisoo but ended up she ate it again, ya Rose ya 😂 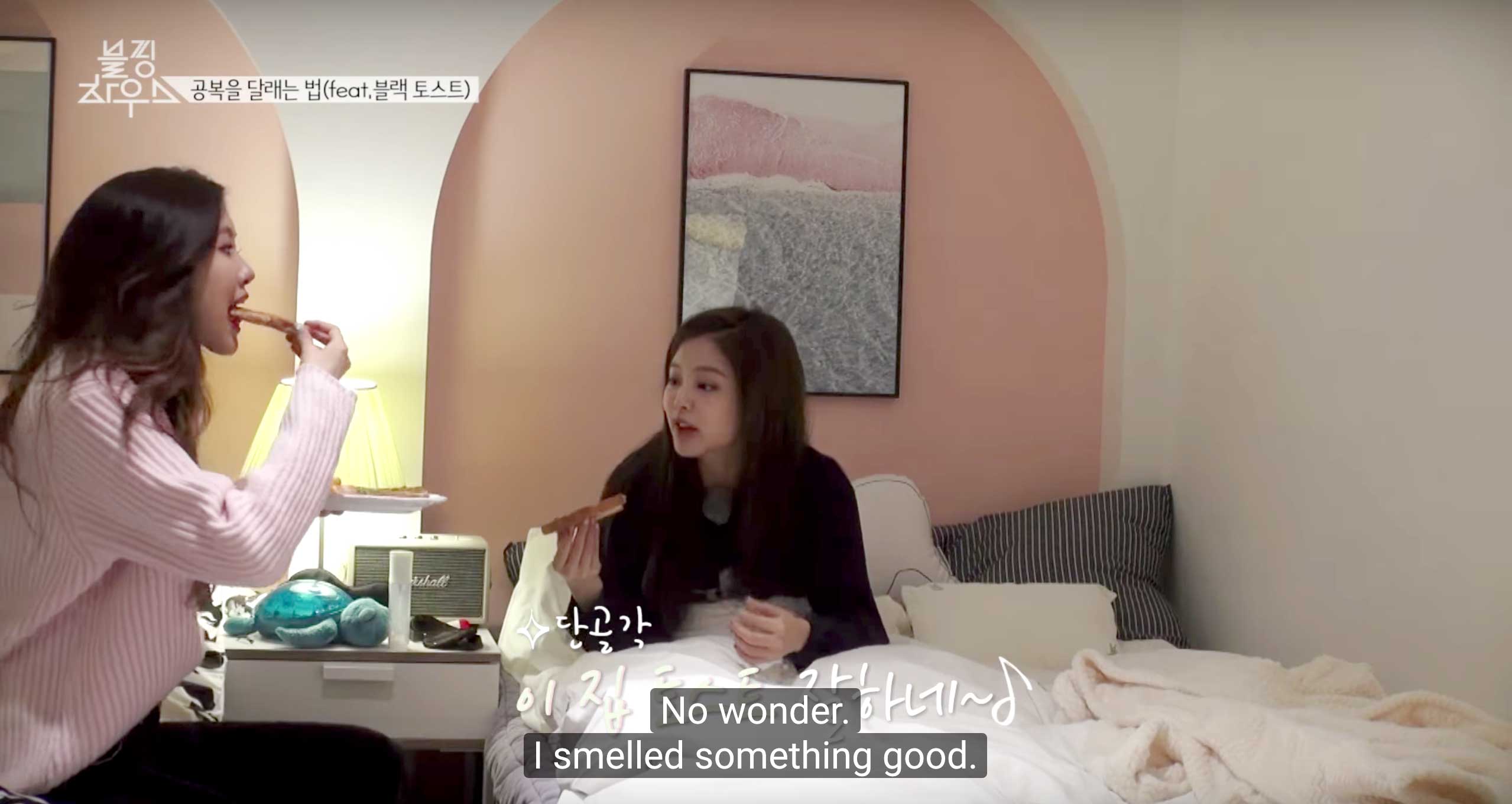 6). The Way Lisa Wakes Jisoo Up is So Adorable

Meanwhile, Lisa came to Jisoo’s room to wake her up. When she suddenly entered the room, she shocked Dalgomie, this scene is funny 😂 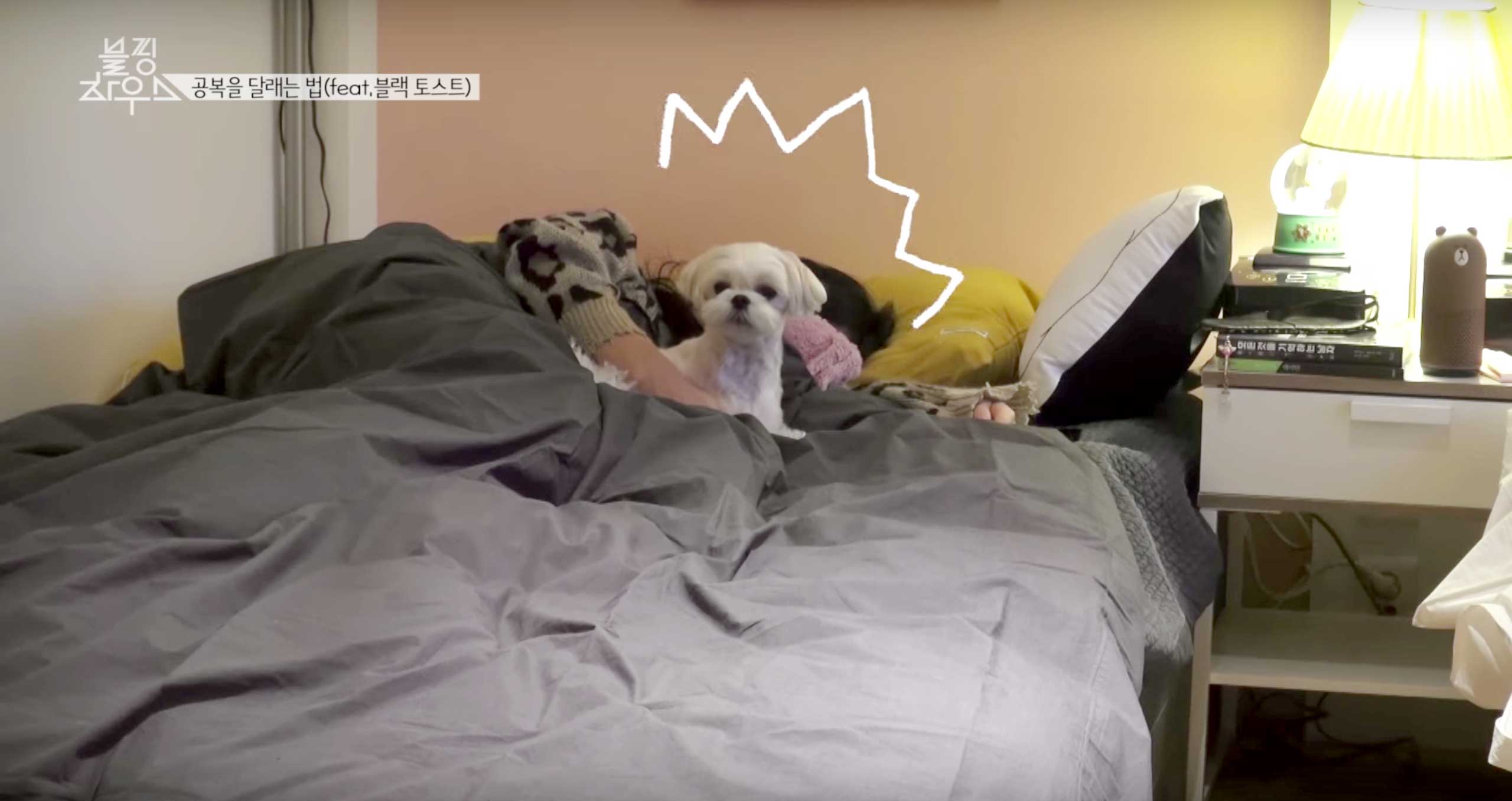 Lisa then tickled Jisoo’s hand to wake her up, knowing Lisa was bothering his mom, Dalgomie was barking. But then he chose to leave the room. Lisa tried to pull Jisoo up, Jisoo said “please stop”. But then Lisa tickled her face and Jisoo was cutely screaming. 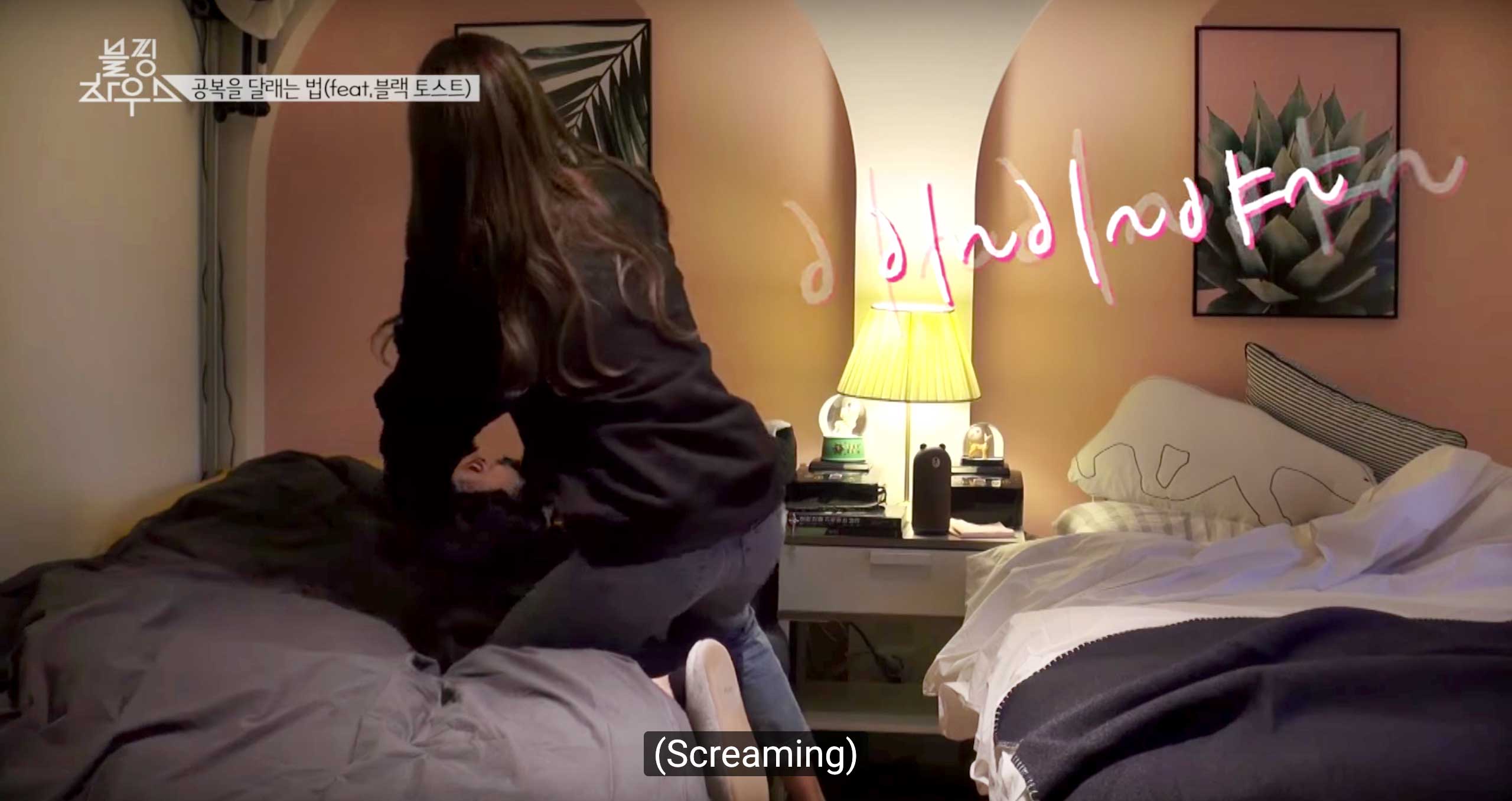 Lisa didnt give up, she forcefully woke Jisoo up by carrying her on her back out of the room, OMG that was so sweet 🙈 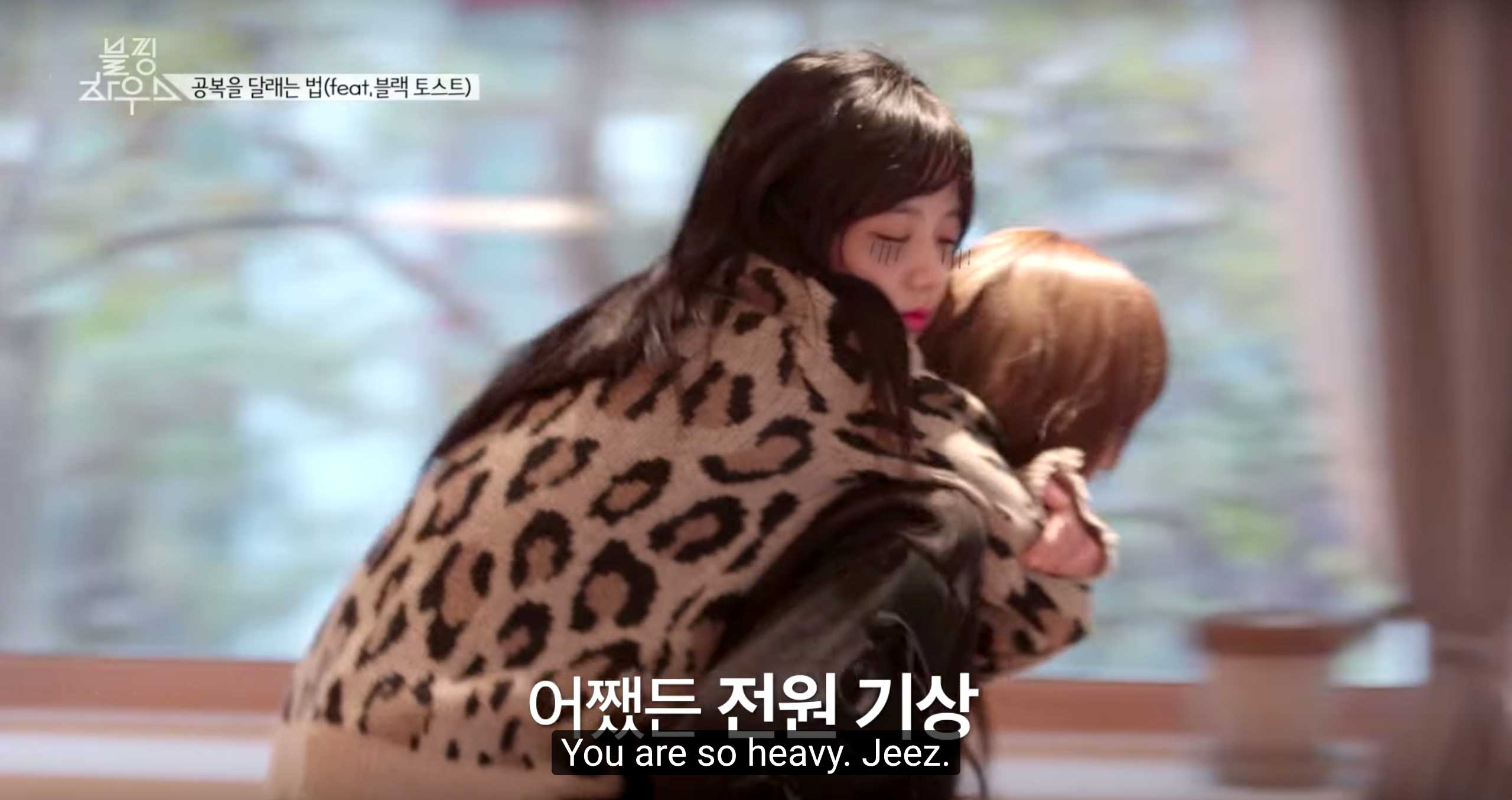 Really, this game is so funny and admirable. Each member has to choose a paper in which there is a member name on it, they have to bought gifts for that member. But they have to keep it secret and dont tell anyone who is their secret santa. 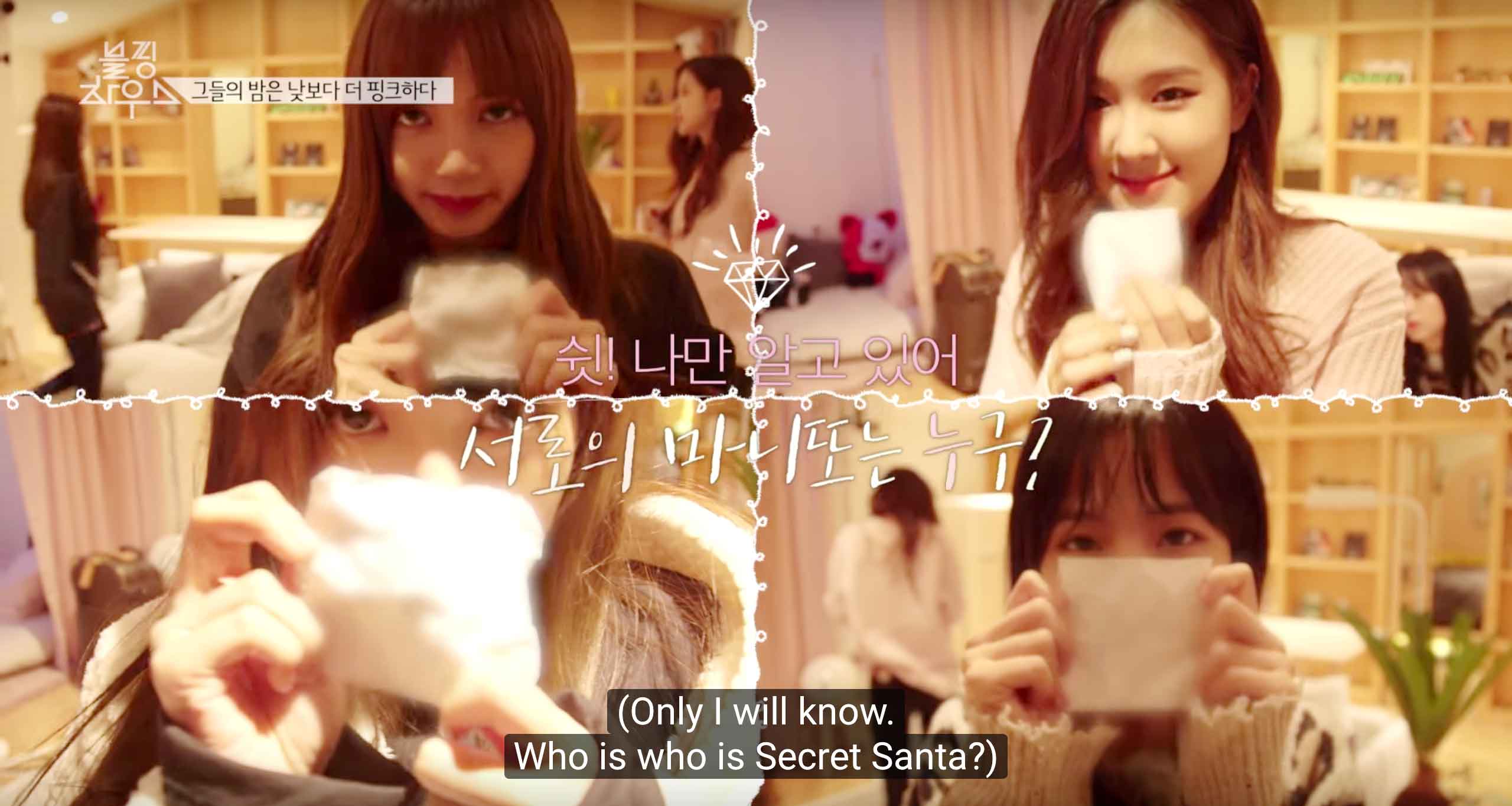 Later on, they went shopping. Blackpink Jennie bought hourglass for herself just to make sure she has brushed her teeth for 3 minutes. It reminds us, once she said Jisoo loves weird stuff but indeed she has no difference 😂😌 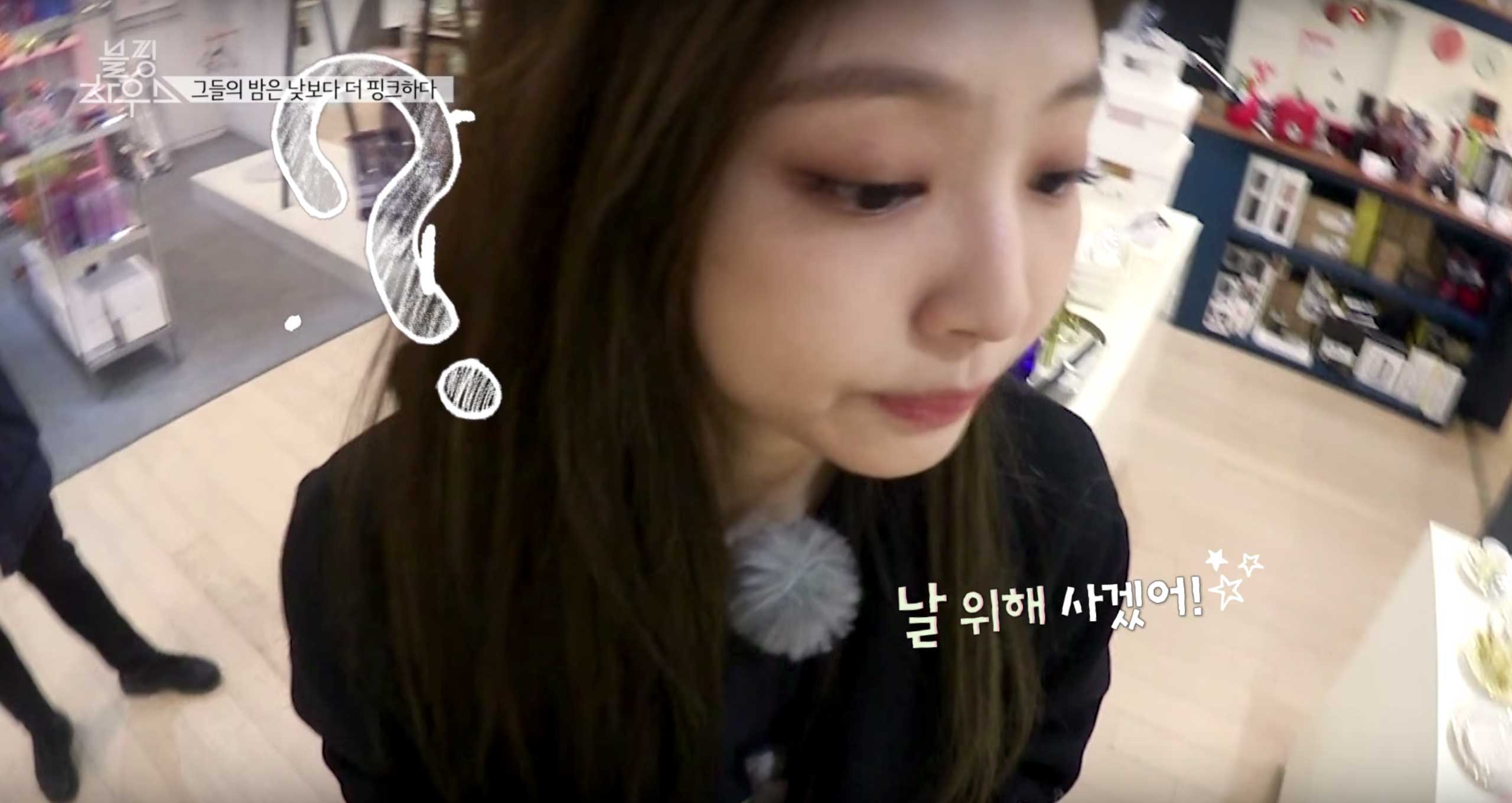 There is a funny scene when Blackpink Rose and Blackpink Jennie unintentionally met each other. They were shocked and move away each other directly. 😂

Aaah never forget the most memorable scene of Blackpink Jisoo shopping moment, she looked so done as always. But now, she slayed it playfully, made her shopping scenes become our favorite 😂

After they held Guerrilla fan meeting, they have dinner party and opened their gifts one by one and guessing who is their secret santa. This scene is also funny, how they reveal their secret santa one by one. How each member secretly payed attention carefully to each other wish while shopping. This game is so amazing and funny 😂 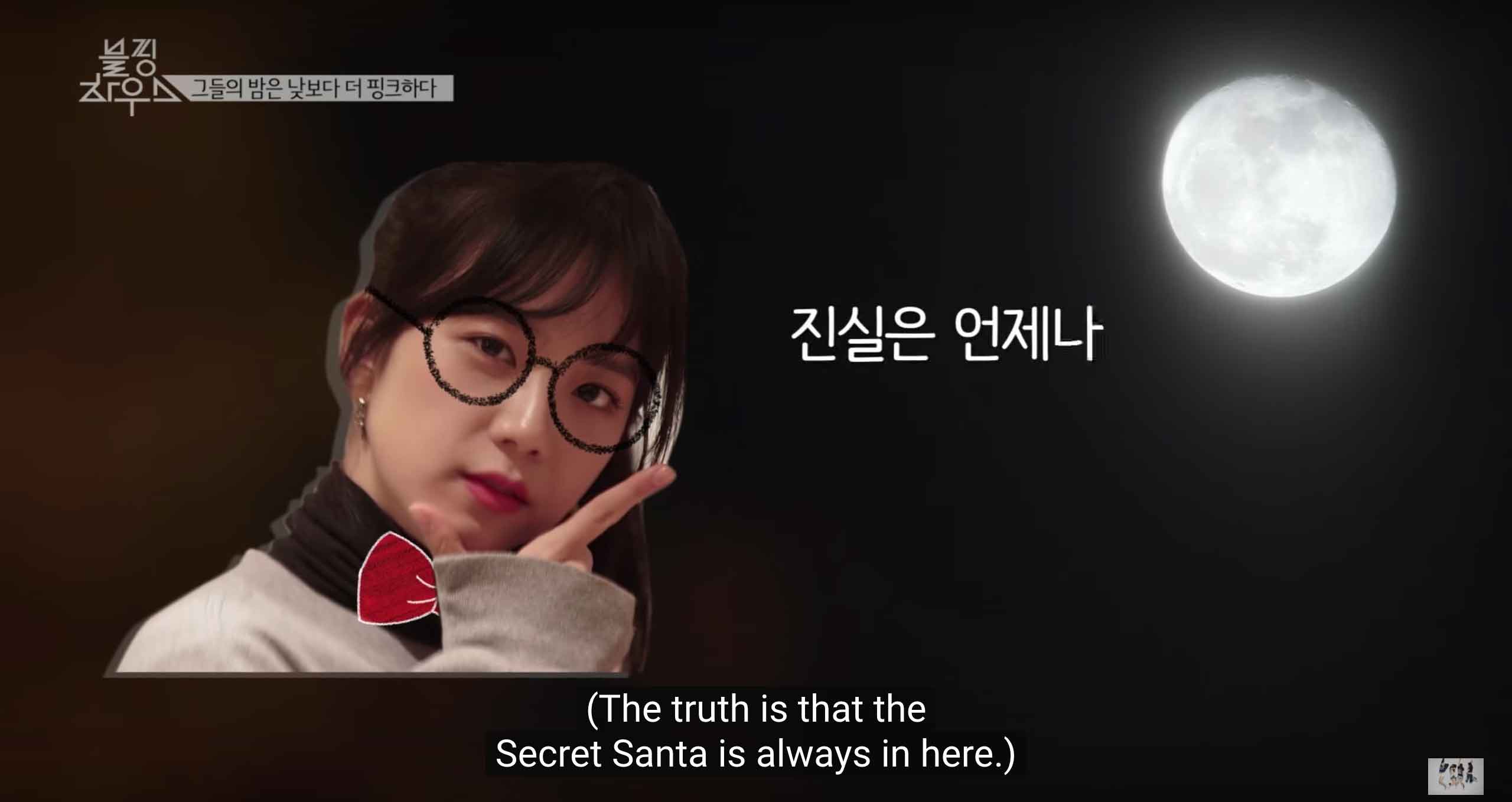 Jisoo is the one who can guess her secret santa

Episode 2, really made us wanted to replay it more and more, it’s really funny. Even when we have to admit, it is funnier than the first episode. We love them so much and cant wait for the last part of this episode tomorrow 😍 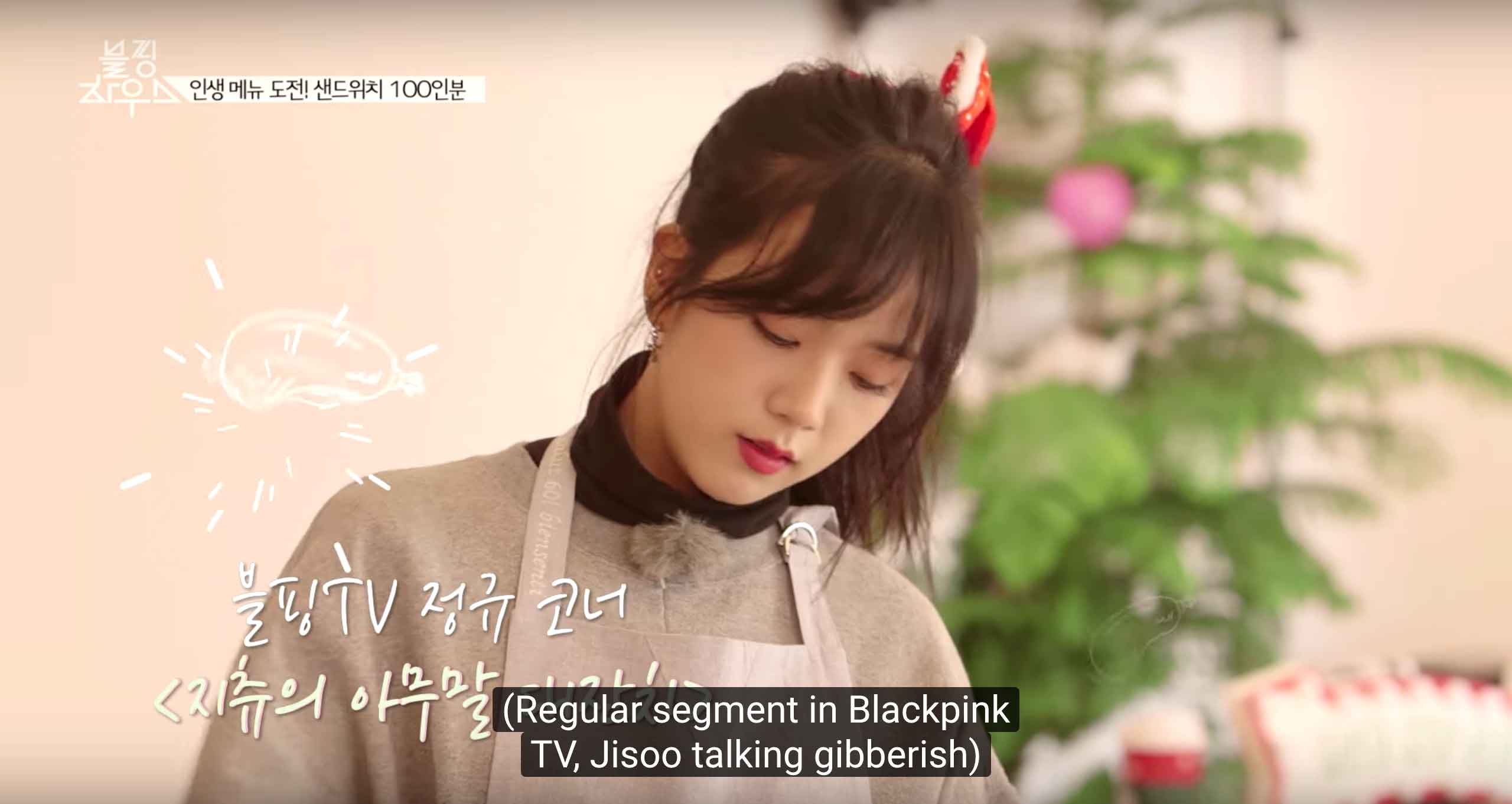 We need to collect Jisoo’s album to be honest 😂